I closed my eyes tightly, I was waiting for the jerk and at last the aircraft left the land soaring high in the sky. I kept my eyes glued to the television screen, temperature outside getting colder and colder and chiller within a few minutes, -23C, -33C, -45C.  I could see the houses getting smaller, the land began to look like a toposheet to me, and there were zigzag lanes. Until, at a certain point of time I couldn’t even see that and what surrounds me is cloud. Clouds of various shapes, as kids drew in their drawing books. So I said to Ma, “we are no longer physically available in India” (as we were yet to cross the entire border line). Ma sighed and said, “dugga dugga”(Indian Goddess). Yes she can say that, as we all have this idea, thanks to Ramanand Sagar and his production, that god really stay behind the clouds, so we might get a chance to say “hi” to her. But, yes we are finally off for Germany after all the drama of last one month and specifically last three days visit to Air India office. I tried to shut my eyes to take deep breath, but the excitement of going to a foreign land kept me wild awake. I took out my mobile and began to take photographs of the clouds, funny it might sound however they came out pretty nice. 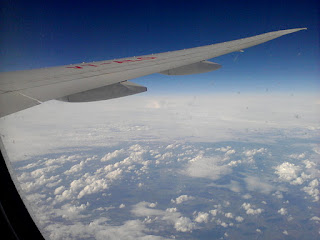 The view was no doubt very soothing but at a certain point of time boring too. Being an Indian and traveling every time on train, one need to see new people apart from your co-passengers and even the hawkers which are always a mode of entertainment along with annoyance. But I cannot deny the hospitality of Air India. The air hostess are aged enough to be called “aunt”, so they care excessively and at time give you a daring look if you ask them to get you something. I don’t remember the lunch they provided because I don’t want to, it was really bad.

It would be taking us nearly 9 hours to reach Frankfurt. Sitting continuously at one place and watching the boring programs and movies was like a hell. The encouraging thing amidst all the frustration was going to Germany and seeing my sister and brother in law, after a year. But the hours and the sun was really irritating as I was watching it shinning high since 5 in the morning and as we were moving towards west the golden thing taking more time to set , how irritating!!!
Oh I forgot to mention about my co passenger, a foreigner guy. Don’t get excited, though I was initially because he was pretty good looking and I must add to that dam irritating. He kept on snoring all the way.
At last the long awaited announcement was made; the journey has come to an end. We landed as Frankfurt Airport and all we need to do was complete the emigration part, collect our luggage and viola we were in the Deutschland. 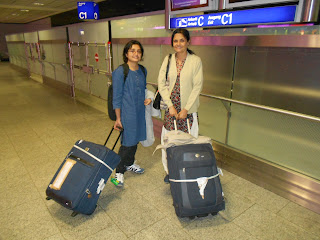 My sister was waiting outside and to our surprise my brother–in-law was also there who was away and supposed to be coming late on that very day from his trip. 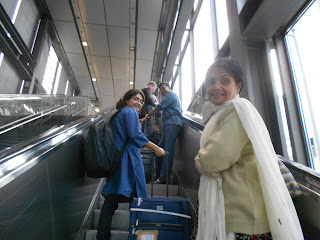 Well, I was so glad and excited that I was helplessly smiling without a word on lips and Ma had only one word on her lips “ki sundor” (how beautiful!). It was cold but we hardly felt it as the excitement was more gripping than the coldness. But to admit the fact, it was cold and we felt it later shivering like an old lady.

It was nearly 6 hours train from Frankfurt to Melsungan  and we reached Didi’s place late at 11:30 p.m and we hit the soft cozy bed without having the dimer jhol (egg curry) ... and dozed off  as we have to start our tour on the very next day for Amsterdam.