Few days back, I boldly updated my FB status with a few words of Tagore. He believed in the confidence of the youth and stated that it is our duty to protect the history of our family, locality and society; otherwise we will lose our identity and our roots. I read these lines back in school and it further catalyzed my love for the subject, History. So, when I decided to plunge into the Belgachiya adventure, this was the first thing that came to my mind.

A friend turned colleague of mine, Eshna, had once located a board stating Belgachiya Rajbari (Palace) on her way to Belgachiya Metro station. When she referred it to me, I made it a point to visit the place as soon as possible. But thanks to our remarkable records, I was unable to trace any information regarding the palace. Fortunately, I got a map (must have been uploaded by some inquisitive teenager, who have marked the palace beside a field calling it as “Amader khelar math”/ our playing ground), which was actually directing another spot 5 minutes away from the marked location.

Even though I was confused, but I decided to take a shot. Traveling to Dutta Purkur or Belgachiya is not a big deal for me because it’s near to my house. The distance is only 15 minutes by foot. After a short chit chat with my friend, Satabdi, we finally decided to visit both the locations.

I am not a big fan of rainy season. But yes, I do like the feel it creates and the cloud formation and the look of the City of Joy after a shower. Well, that makes me a monsoon lover I guess! 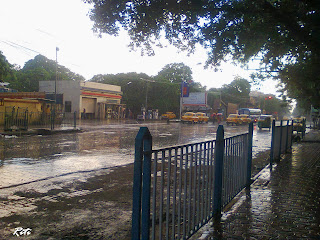 Anyways, even after anticipating the possibility of heavy rain, we decided to take on this adventure and my friend, Satabdi is always the partner in crime on such trips.  We took the narrow, crowded and water logged route of Patipukur, which was the unavoidable path to reach Dutta Pukur.

We found Mamata Bannerjee with her hands folded in the form of “Nomoskar”, standing just below the Belgachiya Rajbari signboard. Ah! Well, not the real Didi, ofcourse. It was just a banner! As we took the pitched lane and began looking for the so called palace, the dilapidated houses and unknown eyes began to stare us. And we took a U-turn saying, “We will come next time with a larger gang.”
Our adventure for the day was not yet over because we still need to know about the place, which I saw in the map. Thanks to my ex-editor, she helped me to locate the name of the place, Mayanibas. After inquiring two people, we finally found the lane. Within 60 seconds, we encountered a large mansion, a pond and a temple surrounded with big trees. But then again we were unable to find the entrance. 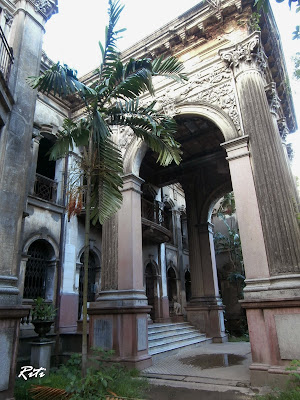 Looking at the two inquisitive and perplexed girls, a man came out sharing some of his Rajbari knowledge. According to him, a number of movies have been shot in this house which includes, Chiriyakhana, Sthirpotro, Jalshaghar. We even came to know that it’s just a big ‘Bonedi’ house belonging to Kesto Sen, who passed away few years back. The house is now being claimed by many and struggling through legal hassles. Things have been more complicated as the property has been recognized as ‘Debottar Sampatti’ (dedicated in the name of God) and hence cannot be sold out as well. Our guide even shared that Kesto Sen was somehow related to Gouri Sen, the famous 18th century Bengali business man. 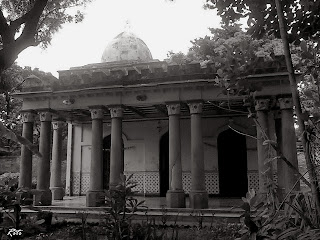 Who knew that the entrance to this Bonedi house was right in front of us! We have been using the lane for years, especially while waiting in the queue for the auto-rickshaw near Belgachiya Metro Station. The narrow lane took us to an iron gate, opening out to a massive house with large columns, which once used to be the original entrance but now has been shifted. 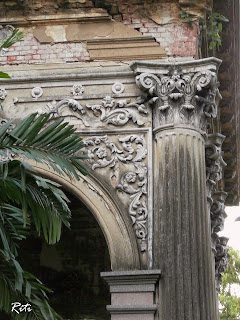 Honestly, there is nothing much to see excepting the fade Corinthian columns with round shaft covered in creepers and other trees. The doors of the temple are opened on rare occasions. We returned back to the original entrance that welcomes the visitors with stone sculptures of elephants and lions. My eyes got fixed at the extended verandah. There was nothing to daze but it got me somehow and pushed me back to the classical Bengal era when ‘Babu’ culture had gripped the Bengalis. 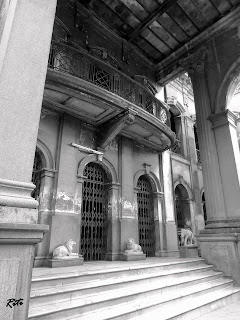 I tried of look through the glasses to catch a glimpse of the interior portion of the house but it was a failed attempt. The month of August is really unpredictable but you can be assured of rain, which soon rushed in and the mosquitoes realized they have wings and can sting as well.
Finally, we were out on the street of 21st century. Water logged roads and traffic at the Patipukur Rail Bridge made me feel that I was still living in the early 20th century. What should I be: proud to still have that age old nostalgic charm or feel ashamed of the situation that shows no signs of development! 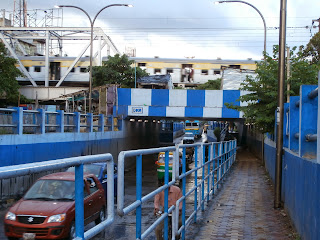 Let us not get into this controversial part; but what I like to focus on is conservation. A little bit of effort can preserve a lot of stories, which are about to lose its existence. There are many other places right here, in Kolkata that need a bit of care and concern from us. Just look around, there is always something to share. Grab your camera, forget about your photographic skills, just click on and show others what they are missing. Behind those broken roads and narrow lanes there are untold events, eagerly waiting to get unfold.