She bears it all,
she never says….
Her eyes get moist,
but she smiles away……

She hides all her despair,
with the rhythmic steps………
Gallantly she stands,
to face ahead……

I know that’s you
I have seen you like this.
Best things does take time
But it is on your way…..
Posted by sumauli at 10:49 PM No comments:

Aum, Amen and Amin- Think About It! 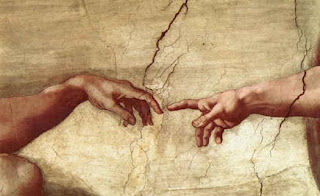 I should be completing my dissertation but I have been forced to drag on to something else after reading the book… The Krishna Keys… Well, as a matter of fact I have not yet completed it, but what I liked is the fact that somebody is actually touching the roots of Indian History and by which I mean the famous line of Dayananda Saraswati, “Back to Vedas”, to write something hard core. I am here not to write a review but to share about a theory that I have learned back in my post graduate history classes. But unfortunately, I do not remember the propagator’s name, it can be Vico or I may be wrong.

He states that when two civilizations develop at same point of time, they share some common ideas. They exchange thoughts, stories and even cultures. This is the very reason that gave rise to stories or folk tales that share common baselines. It can be an inspiration or mere description of events that has been witnessed by both of these civilizations.

Now, here is my point. If I follow this theory then can we say Hinduism, Christianity and Islam are contemporaries of one another?  I do not wish to hurt the religious sentiments of anyone. But have you ever given a deep thought to these three words….. ‘Aum’, ‘Amen’ and ‘Amin’? Don’t you feel that they sound on common note?

Aum is the symbol for Hinduism, Amen for the Christianity and Amin for Islam.
Which is the oldest religion on this earth? A question that swells up a lot of discussions and debates! But if I say these three religions developed at the same point of time and they shared some common ideas and at times customs as well.