It’s been a month since I updated about my trip to Germany. I was talking about castles in Denmark but then suddenly a movie that I saw yesterday shifted my focus to jump over the castle part and take my friends to the days I spend in Berlin. But I promise to elaborate my wondrous experiences with castles very soon.

Mukherjee family has an old connection with Berlin, since the day my uncle got married to a German lady, back in 1960’s. I haven’t seen him because he passed away much before my birth but we still are in touch with my aunt, though she has remarried. In spite of a woman belonging to the era of mid 19th century, my grandmother was a very strong lady. I must say she was modern enough to accept her daughter-in-law’s second marriage and even accepting my step uncle in her son’s place, especially at her age of 86 years.

As a kid, I used to go through all the pictures in my grandmother’s album of Berlin and fantasize my dream to visit the distant land. Moreover, being a student of history, the amount of knowledge that I have gathered studying about Germany was much more than any other countries in the world. So when I landed in Germany, a smile was on my face thinking, “At last I am here to know you better”. 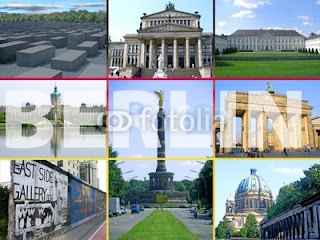 Germany, a land that had reached the zenith of power, with time grovels in the dust of devastation. It is a country that has witnessed the merciless dictator to rise and fall, at the same time bears the pain of the Wall that separated them from their loved ones. Berlin is one of the places in the world that still holds the evidences how inhuman, we, the human can be. It warns us not to repeat the same mistake that have taken away millions of innocent lives.

In other words, my trip to Berlin was like the pages in history book which was coming alive in front of my eyes.
Posted by sumauli at 3:20 PM 1 comment: