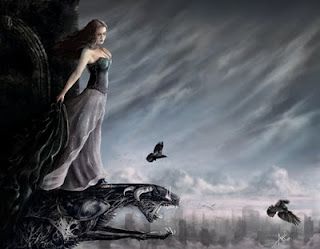 Suddenly clouds gathered around, a bit of hope now lost its track,
Flickering mind try to find a way but the walls of heavy clouds resist the path.
She steps back but pushes to move ahead
The thought of getting there, kept her alive.
Last time she missed her chance, fearing to lose something more..
If she misses it again, she can’t think of as this time it is important in itself.
I hardly know whether she will get it right, but I know her hope is true this time
Believe in yourself, and I know she does but will she find her track again?
Posted by sumauli at 12:33 PM No comments:

Copenhagen- The City by the North Sea

True enough, it does not take a week to reach Denmark from Amsterdam, as the journey was only about half a day.  We reached the city of Copenhagen, the capital of Denmark early in the morning at 8 am. Another country I stepped in, within just one week- Germany, Holland and now Denmark. Last week I was in my home at Kolkata, thinking “summer in Europe” and am already in the continent. Wow!!
Like always, our first destination was already decided by our guide, Sayanda, and we followed the map and set forth to our journey. Denmark is a constitutional monarchy with a parliamentary system of government. I said to myself, “Ok so here is that set of theory that I read in my Political science books.” The ability to carry old with new has pleased me since my very inception to this foreign land that ruled the portion of the world once. We had this wonderful opportunity to witness the “Change of guard” session in front of the Amalienborg Palace.
It is a huge palace, (as it should be) covering a large area in the city and there were royal guards standing on each of the entrances with still and straight view, very similar to the guards, back in London.
Like typical tourist, I hopped on and clicked some pictures with a very smart looking royal guard, who actually warned us of keeping a safe distance in a hush but strong tone. Funny eh!!
There were sudden shouts, I mean commands and these guards changed their duty position marching away. We came to know, the Queen would be going somewhere and immediately 5 or 6 Mercedes (my eyes were fixed) drove out of the Amalienborg Palace towards the city.
A portion of the castle has been opened out for the laymen to enjoy the visual bliss of the richness of the castle. The rooms were huge, exceptionally decked with classic royal stuffs and furniture. I stared at the dresses, so well designed and I recalled my fairy tale stories with princess wearing similar dresses, gorgeous they were. I was very happy to know that the king have a son, I said, “I have a chance”, but then the thrashing moment came, the wedding picture of the prince along with a child was on the palace wall. With broken heart and shattered dreams of ruling Copenhagen, we moved out of the castle to our next destination.
Marching ahead, we visited the Marble Church. It was beautiful and as the name suggests, it is made of marble.
Not knowing where to go next, because our guide decided to give us a surprise, all he said we need to rest. There was an exotic fountain with fresh air around, we decided to halt here and catch up our breath. There was a statue in the fountain with excellent architectural depiction and a powerful posture of a man who stands with angry bulls.
Cherishing the surroundings, Sayanda said, “Now we go to see the sculpture of Little Mermaid.” I stared at him for 5 seconds and started hurrying, looking at the map by myself to reach the next stop. We walked by side of the North Sea, enjoying the sea breeze and smart looking buildings. With the soothing sun rays and clear blue sky without the horizon was something beyond my ability to describe. In one sentence, “I loved it.”
She was sitting on a stone, self composed, looking for something, that’s how Little Mermaid looked. As the story goes, Little Mermaid fell in love with a prince and left her marine life to be with him but the end was painful, inspite of getting the human features by drinking the magic potion, she failed to get her love. She was asked to kill the prince, if she wants to live. Little Mermaid couldn’t do that because she loved the prince. She was left with one choice and she did that by sacrificing herself to the sea.

As a kid, my sister was the story teller and I don’t know how many times I asked her to narrate this story.  “The Little Mermaid" was written by Hans Christian Andersen in 1836, and first published in this very city of Copenhagen. We took some snaps posing with the mermaid statue and moved ahead.
In Copenhagen, I was introduced to a mouth watering dish known as Donor Kebab. This is a Turkish roll and I loved it so much that from then onwards wherever I went, if I was asked, “What do you want to have?” I say, “Give me a donor kebab please.” (Detail coming later)
And we hopped again to another destination, with map in my hand as I am the guide now. I am not good in reading maps, as in India you don’t need one, as you can find routes at every round and corner, now and then alleys popping out from nowhere. But things are very different in Europe; at the end of every road you will find stands or boards on buildings with names of connected roads according to its direction. So, reading map is easy if you keep your eyes onto the boards.
Successfully, I guided us to Rosenberg Castle. It is a renaissance castle located in the heart of the Copenhagen city. The castle was originally built as a country summerhouse in 1606 and is an example of Christian IV's many architectural projects. We were late and had only 1 hour in our hand to see the entire castle. I was repenting the time loss, the first castle that I could have enjoyed was about to get close. We ran from one corner to another, but could not enjoy much. We went to the treasury and my eyes got dazzled with the sparks of rubies, gold, diamond and what not.
Well, we were asked to leave as the time was over and the castle got closed. The garden belonging to the Rosenberg Castle has been opened out to the public; we stroll around watching boys and girls to play, studying and enjoying the sun rays with fun.
We took a canal cruise and went along the city cannel lines. The city has modern buildings by the side of the old ones, a typical trademark of European culture.
It was a wonderful trip seeing the sun rays getting softer, painting the sky with golden brush and the azure sky getting darker as the sun began to set in the west, the land of beauty. 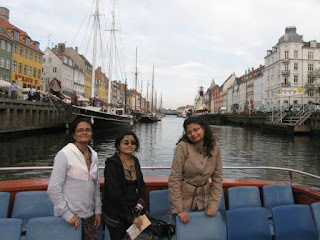 While returning back to our hotel at 9 pm at night, still enough light though, we came to the centre of the city. We were informed that the queen was about to leave from the Town Hall. My mother was like, “I want to see the queen, please.” So, we decided, well we should see the Queen after all, this is a constitutional monarchy.


We were waiting for hours and as for me, I was checking on to some handsome people around when someone said, “Hey here comes the Queen!” We glued our eyes to the door that got open and a young lady came out, good looking. Well I said, “Nice.” But then someone said, “Hey that is not the Queen people, look behind.” Naturally, being tourist we believed the unknown man and soon found a frail, faded, old women coming out waving her hand and surprisingly, I saw a woman waving hand to her along with others, looks similar to my mom. Well, my sister and brother-in-law realized the amount of excitement that was building in her finally burst out in waving hand.  But Ma was sad; she thought the Queen would have dressed in her big glowing gown as the picture showed back in the Amalienborg Castle. Rather she was wearing a very modern and common dress. 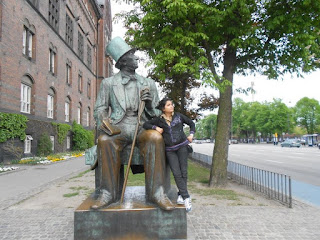 First day in Denmark was fun. I read about castles, have seen them in movies but to witness it was something very different. As if, it feels massive and royal. Returning back to the hotel, somehow I felt, I am in love with Copenhagen. The moment I hit the bed, I dozed off, waiting eagerly for the sun to rise to know and see more.
Posted by sumauli at 10:05 PM 3 comments: