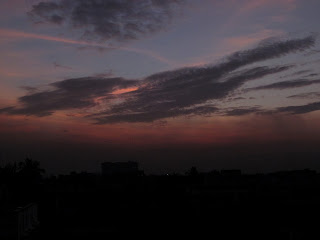 She was going through the pieces of papers for the last time. Was she missing someone in the letter? She re-read the three pages over and over again. Everything has been framed properly, just the way she wanted. As she lifted her head up, the golden clouds in the sky brought a big smile on her face. Finally, something in her life was going to be right.

She started searching around for her cell phone. After an elongated discussion with him, she ultimately bought it. The passion for photography was something she could not resist. So, why not take the picture of the last sun set in her life?

“Clicked”, she said. “Am done! Let’s pack up!” she said it loudly from the 10th floor of her building. As she walked to the corner of the water storage, another view caught her eye. This time, the rays of the pinkish shaded clouds was falling on the nearby lake. “Damn!” she shouted, “Why don’t you just let me jump? You idiot nature!” Again she took her phone out and clicked with tears gushing out of her eyes.

It was getting dark and she knew there was no one at home to know about this accident. She has the time to jump again. The fear of death no longer makes her afraid. But the fear of missing everything was gripping her.

Everything around her seems like breathing, even the cell phone. She has not been talking to him for last 3 weeks. In spite of intense hatred, she went through the SMSs again. There was fun, flirt and even a bit of seriousness in all the messages. With one click she deleted it all and stood up again to finally end itl. But while putting the phone down, somehow she touched her picture folder. She always hated touch phones and she could feel the same disgust even before committing the crime.
As she brought her Nokia set, close to her face, the very first picture took all her strength away. She shouted with all her anger and disgust….and she was back to senses!

She can’t take it away because she is not the one to bring it on this earth. She has no right to kill except the right to live, and let others live. How can a single incident break a relationship that begins even before she has seen the blue sky?

And she smiled. Crumbled the three pages in her hand and threw it away into the darkness.
Posted by sumauli at 8:45 PM 3 comments: